This focuses on home lab and small brewery lab techniques.

General (links to other pages)

Density Meter's are a much more accurate tool for testing things like ethanol content as well as other things that can be useful in a brewery setting.

Dissolved oxygen meters play a large role in brewery QC of the final packaged products as well as oxygenation of wort pre-fermentation. Although cheaper DO meters can be used to find the PPM(parts per million) of oxygen in the wort pre-fermentation, more expensive advanced equipment is needed post fermentation as you'll need equipment that is capable of reading much lower levels of DO on a ppb level. When monitoring DO its crucial to be under 100 ppb packaged DO and for hop driven beers its ideal to be under 50 ppb or else you risk oxidation and other off flavors associated with oxygen.

During DO packaging testing, Justin Amaral found that breweries have issues with DO coming directly from their canning/bottling system. The most common factor found in high DO readings was in proper purging of lines when starting up the machines or taking a break as well as mechanical failure.

An orbital shaker is a laboratory device used for mixing substances or maintaining movement of fluids. Maintaining movement of liquids has been shown to help some microorganisms grow. For example, running a shaker at 80 RPM for Brettanomyces starters is an effective way to grow this genra (see Brettanomyces starters) [1]. For a home orbital shaker example, see Example of a Home Lab Orbital Shaker.

TA meters can be a very useful tool in sour beer brewing. Although its generally been used in the wine world to measure the acidity of wines, it can be used on beer as well. Although pH can give you rough look how acidic something is, it doesn't really give you a accurate outlook on how acidic something is on the palate. Please refer to http://www.milkthefunk.com/wiki/Titratable_Acidity for more info.

A Spectrophotometer can be used for an array of tests. They are commonly used to analyze SRM, IBU, ethanol content and other wort compositions. They can also be used for cell counts as well as other microbiology facets.

Using a UV sterilization cabinet can not only help cool/sterilize freshly poured plates but it can be used to UV sterilize other things as well. The build itself is quite simple. You will have to do some basic wiring.

Ideally you'll want a Laminar flow hood with a UV light in the hood, but this will do for just cooling plates or doing quick UV sterilization.

Catalase enzyme can be spread onto MRS media to assist with culturing so-called "viable but non-culturable" (VBNC) bacteria cells; see the Quality Assurance page for details.

NBB media can also be used to help detect/isolate spoilage bacteria. This is a pre-made media by Doehler. More info can be found at NBB Media. Although ASBC suggests this media its most likely favored by them as their recommendations are generally products sold by Siebel. After a quick discussion with Richard Preiss cheaper media can be used to reach the same goals. Using HLP, WLN w/ cycloheximide and tween 80, and MRS w/ cycloheximide and tween 80 you can achieve the same results as using the array of NBB media available.

Advanced beer-spoiler detection medium (ABD), which is basically MRS with some of the MRS substituted for beer, has reportedly been shown to be a better growth medium for beer-spoiler LAB which have adapted to the brewing environment and are difficult to grow on other media. This media also has the advantage of inhibiting the growth of other microorganisms that are not beer spoilers. In order to grow some very slow growing strains, microcolony methods using carboxyfluorescein diacetate (CFDA) and species-specific fluorescence in situ hybridization (FISH) allows detection of slow-growing strains of LAB within 3 days, although the CFDA and FISH approaches require special equipment that might not be available for some QC laboratories [6][7].

Nick Impellitteri from The Yeast Bay shared his formulation for a 1 liter formulation [8].

Developed by the ASBC and BA. Hsu’s Lactobacillus and Pediococcus (HLP) media can be employed to screen for common beer spoilers, while selecting against other organisms, such as yeast, gram negative bacteria and aerobic microbes. This video outlines the ASBC Methods of Analysis technique for utilizing HLP media in a brewery. The benefit of this media is that it doesn't need to be autoclaved or incubated anaerobically, so it is a good option for small breweries with limited lab equipment.

Omega-optimized LCYM Media (Autoclaved for no longer than 15 minutes to preserve copper-containing ingredients. This media is specifically for detecting diastatic strains of S. cerevisiae; reported more reliable detection than regular LCSM and Weber diastaticus media; see this MTF thread by Laura Burns from Omega Yeast Labs and the associated write up)

Escarpment CSSM (A modified version of the Omega LCYM Media. This media is specifically for detecting diastatic strains of S. cerevisiae; Also reported to culture beer strains of Brettanomyces, Pichia, and other wild yeasts[11] - see this MBAA paper.)

A few different media can be used to isolate Brettanomyces but DBDM medium is commonly used. WLD with additions of cycloheximide can also be used. A simple Malt agar with cycloheximide has been shown to grow Brettanomyces that has been adapted to the brewing environment more efficiently than Dekkera medium (recommended by the European Brewing Convention, but not listed here) and universal beer medium (recommended by the Brewery Convention of Japan; also not listed here) [12]. DBDM may not allow all strains of Brettanomyces to grow [13]. The Escarpment CSSM media for diastatic S. cerevisiae is reported to also be a good growth medium for beer strains of Brettanomyces (see Saccharomyces above).

Renouf et al. (2007) and Comitini et al. (2019) demonstrated that an "enrichment Brettanomyces bruxellensis" media called EBB is more efficient at first growing up Brettanomyces before trying to culture it on DBDM. Brettanomyces was allowed to grow for 80 days in the EBB media, and then streaked onto DBDM for selection for Brettanomyces (other wild yeast such as Hanseniaspora and Pichia grew much more readily than Brettanomyces that was cultured from wine grapes) [14][15].

Due to the slow growth of Brettanomyces on traditional growth media, a new technique called indirect impedance, which utilizes electrical currents to measure the impedance of the electricity caused by microorganisms, has been proposed as a way to detect Brettanomyces in wine [16].

See this article by Dr. Bryan Heit on using a modified YPD media that is cheaper and easier to prepare than WLN, along with techniques to help improve the chances of culturing wild Brettanomyces while mostly eliminating other yeasts and mold.

Click here for directions on how to make this medium. The below recipe is using the Suzuki (2008) recipe instead of the recipe in the linked directions.

This is a simple non-synthetic yeast growth media shared by Cory Widmayer on Milk The Funk, and is based off of Leite et al. (2013). See Widmayer's post on MTF for directions on using this media (requires aeration; the batch feeding process may not be necessary, see comments by Dr. Bryan Heit). This media and method are claimed to grow Brettanomyces very quickly. Widmayer also provides a synthetic version of the recipe on the MTF post.

Isotonic Sodium Chloride is a saline solution which can be used for storage of microbes. Depending on the species, survivability times can range. It should be kept cold just above freezing. Most Saccharomyces strains handle this storage well and can be stored for 2 years like this before needing to re-propagate and re-banking. After one year Lactobacillus and Pediococcus seem to survive moderately well depending on the strain. Brettanomyces however seems to have a harder time maintaining good vitality. Please refer to Justin Amaral's post for information about this.

Growing cultures from slants or plates:

The propagator below has a 14 gallon capacity, allowing a prop up of 4.5 BBL. This same set up can be used on any fermenter but is best used on ones that can hold 5 PSI and up. The seal on the below fermenter can hold around 5 PSI but clamps are also used on the lid to ensure it can hold up to 10 PSI. It essentially acts as a large stir plate while allowing to trickle in either O2, NO2 or CO2 depending on what your propagating. Ideally you'd also use a non magnetic drive pump but its not essential.

Below is the draw up of the build out for this prop up tank. As you can see it uses quick disconnects but you can use tri-clover connects as well. It also uses a diffusion stone that connects into one of the ferrules allowing you to trickle in gases. The picture shows a diffusion stone directly into the fermenter but its since been adapted as shown in the other pictures below to allow the diffusion stone to be behind a valve so its only exposed when needed. It also uses a whirlpool connector that goes into the fermenter creating the whirlpool when the pump is on:

Making Your Own Media

Although media can be bought pre-made, you can also make these media yourself. Media can be either sterilized via an autoclave/pressure cooker or using sterile filtering. Keep in mind it can be difficult however to sterile filter some items such as yeast extract, peptone and brewer's grade DME. Because of this some just autoclave parts of the media while sterile filtering the rest into the sterilized media.

It is crucial you use aseptic technique with your media once it is sterilized to prevent any contamination. If you are storing extra media for later use make sure to remake it every month or 2 if unused.

Anerobic chambers can be costly. Here is are two DIY methods. The first achieves under 1% O2, and both methods will also prevent mold growth.

Afterwards, seal the package of Oxy-Sorb with a vacuum sealer. Otherwise they will begin to absorb oxygen [18].

An alternative method using a vacuum sealer and a jar lid adapter:

These methods were shared by Bryan of Sui Generis Blog and Zach Taggart of 42 North Brewing Co. See this MTF thread for details. 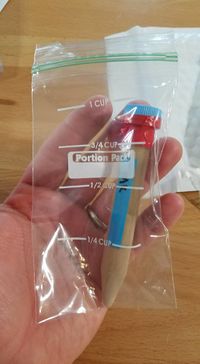 DeWayne Schaaf recommends the following procedures for shipping cultures with the USA states and territories [19]:

For 5 gallon pitches or cultures that may still be a bit active creating cO2 Soda Preform tubes work very well. These are the same type of tubes White Labs uses for their homebrew pitches. https://www.amazon.com/Soda-Bottle-Preforms-Caps-30/dp/B008MB1QNY/ref=sr_1_1?ie=UTF8&qid=1504524577&sr=8-1&keywords=soda+test+tubes