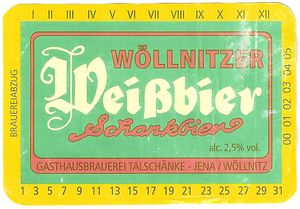 A Lichtenhainer is a sour and smoky beer from Thuringia, Germany that can be brewed with a third of Pilsener malt, a third of wheat malt and a third of smoked malt. There is no consensus on the original recipe, some variants omit the wheat, others the pilsener. Lichtenhainer has a low bitterness and a complex flavor, but is still refreshing due to its subtle balance between smoke and sour. This style does not contain salt or spices. Lichtenhainer is usually unfiltered, so some haziness is to be expected.

Northern Germany was once home to dozens of top-fermenting beer styles, but most were pushed away by the more popular lager at the end of the 19th century. A few styles managed to stay past WWII, fewer still until today. Gose is a good example, as is Lichtenhainer. Despite its tiny heartland around Jena in the East of Germany, with the exception of a 14-year gap in the 1980s and 1990s, it’s been brewed continuously for a few hundred years. Lichtenhainer has its roots in a handful of villages: Ammerbach, Ziegenhain, Winzerla, Wöllnitz, and, naturally, Lichtenhain. Though at the height of its popularity toward the end of the 19th century, it was brewed throughout Thuringia. They even made it in Eisenach, over 100 kilometers away.

"To make this type of beer one third wheat and two-thirds barley malt are used. The wheat malt is ground fine, the barley coarse, to help filtering. The mashing procedure is brief, a kettle mash or a thick mash. The hopping rate is one pound [half kilo] per zentner [50 kg] of malt, boil time 90 minutes. It's pitched with top-fermenting yeast, one lier per zentner. Fermentation temperature 22º C, barrel fermentation. Primary then bottich (vat) fermentation is rarer; pitching temperature usually 15º C. The gravity of the wort is between 8 and 10º [Plato]. They are highly-attenuated, highly carbonated and wholesome and are regarded as special beers."

Rommel and Fehmann have the following to say in "Die Bierbrauerei" (1915):

“Lichtenhainer is also a pale beer brewed from lightly smoked malt, though only barley malt is used. The approximately 8º Plato wort is very lightly hopped and only boiled very briefly and exposed to either a spontaneously appearing or deliberately started lactic acid bacteria infection that gives the beer its weakly sour taste. The mostly young beer, which isn’t expected to be clear, is usually served from a barrel.”

The last Lichtenhainer was brewed in Wöllnitz at Brauerei Ed Barfuss Söhne in 1983. After an hiatus of a few years, in 1997 a brewpub in Wöllnitz started creating Wöllnitzer Weißbier, a beer in the Lichtenhainer style.