Introduction to Alternative Fermentation of Mead

Most modern mead is currently fermented using clean yeast strains, but like many other alcoholic beverages its history is filled with wild and spontaneous fermentation as clean fermentation practices didn't start to become known until the 1800's. Mead's can range quite widely on alcohol content, which is primarily affected by the amount of honey added. Mead can also be broken down into different categories such as Melomel(fruited mead), Metheglin(spice/herb mead), Capsicumel(meads with chili peppers) etc.

Like most wild fermented beverages, a wide variety of techniques can be used to make alternative Meads. Below you'll find a list of ways you can use to ferment your wild Meads but feel free to experiment. 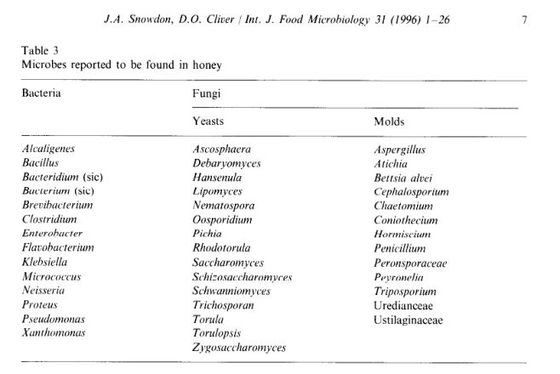 Microbes reported to be found in honey. Source: "Microorganisms in honey". Snowden and Cliver. International Journal of Food Microbiology. 1996.

Just about any naturally occurring sugar source can be spontaneously fermented, which of course includes honey. For the most part, it's very similar to spontaneous beers as far as capturing ambient microbes. The big difference is the controlling of microbes by types of carbon sources as well as acid contributions from hops. Hops can be used to reduce Gram-positive bacteria populations, but hops are not normally used in most meads. Also unlike spontaneous beers, you normally wouldn't be heating must (unfermented mead) up to a boiling temperature so the cooling process is a bit different. It has been demonstrated that while honey is antimicrobial due to its high sugar concentration and low water concentration, which inhibits the growth of microbes, honey is not inherently pasteurized or sanitized (see the Mold page for details) [1]. To add a bit of control you could add things like maltodextrin or fruits/vegetables with complex sugars.

Being that raw honey can have a host of microbes within it, the only way to do a true spontaneous mead fermented with ambient microbes is to use a pasteurized honey with water that has been pasteurized or boiled. Outside of this technique, it would be considered a wild Mead. You could also pasteurize your own honey by holding the must at 170 F for 20 minutes but you may also risk losing some of the honey's attributes and flavors.

The concept of catching the ambient microbes is very much the same as beer, however. For large batches, you can use coolships, in which case you can refer to the Coolship wiki page for proper dimensions. The dimensions matter less for the cooling rate as you won't be bringing the must to a boil but will matter for the volume to surface ratio for inoculation surface. As mentioned on the coolship page if you're doing smaller batches it's best to just use your kettle as a coolship vessel. If you're looking to imitate cooling rates of lambic you could use external heating sources in your coolship vessel to keep the temperature from dropping too quickly in colder environments.

Like most "wild" alcoholic beverages, many techniques can be used when making wild Meads. The thing to keep in mind about wild Mead is osmotic stress due to high gravity environments. You can expect most Meads to ferment dry, but that isn't always the case as wild microbes may not have the ethanol tolerance to consume all the available carbon sources. This of course doesn't apply to all microbes but is found more when doing wild captures/spontaneous Meads. Through anecdotal trials, a gravity of 1.060 or lower has been found to have the best results to complete a full fermentation leaving a dry mead but of course leaves you with a lower alcohol Mead. Trials with higher gravity have varied with both success and failure. In cases where trials have failed, another yeast strain can be pitched to finish up the fermentation. This can still leave you with wild qualities to the Mead and can ensure the fermentation completes. 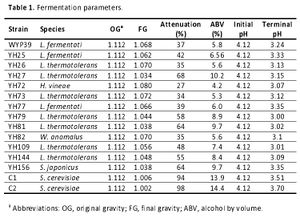 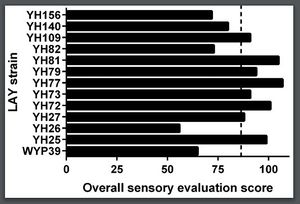 Sour meads have become a small experimental subsection of mead making, according to the American Mead Makers Association. Souring processes include souring with lactic acid bacteria prior to yeast fermentation, as well as Mixed Fermentation that is reminiscent of sour beer mixed fermentation. Peepal et al. (2019) compared meads fermented with 13 strains of so-called "Lactic Acid Yeast" (LAY), which are yeast strains that have been demonstrated to produce lactic acid as a byproduct of alcoholic fermentation. LAY have previously been used in beer fermentation, and their potential use in mead making was unknown. Overall, the LAY species had a lower attenuation compared to the industrial wine yeast strain that was used as control (WLP715), however, sweetness in mead can be beneficial. Even though the mead fermented with WLP715 resulted in a similar pH as the meads fermented with LAY strains, the meads fermented with LAY strains tasted more acidic due to the production of lactic acid [2].

Overall, the most preferred mead fermented with LAY was one of the strains of L. fermentati, which produced a mead described as smelling citrusy and tropical with a mild, fruity flavor. The least favorite mead fermented with LAY was fermented with H. japonicus. It was described as being pungent, phenolic, bitter, and as tasting like acetone. There were some inconsistencies with final gravity for some strains. For example, one strain of H. vineae previously produced a mead with 8.2% ABV, but in this experiment it produced a mead with only 4.2% ABV. The reason for this lack of fermentation consistency with H. vineae is unknown, although it could have been due to a variation in honey types between the two meads or the yeast nutrients used. The researchers concluded that LAY strains present a viable way for producing sour meads, and more research and experimentation on behalf of mead makers is encouraged, as well as the addition of a sour mead category in the BJCP Mead Styles [2].

In general, kveik is tolerant of high alcohol and can produce good results when fermenting mead. Justin Amaral reported good results using the TOSNA nutrient calculator, but increasing the nutrient amounts by 20% and shortening the time between dosages to match the fast fermentation speed of kveik.

See Kveik for more information on this yeast and how to use it.

It is possible that mold can grow in mead if the fermentation lags for a considerable amount of time. See Mold for more information.

The variety of honey used in a Mead can vastly impact the flavor and final acidity level. Honey can contain a multitude of organic acids including acetic, butyric, citric, formic, gluconic, lactic, malic, pyroglutamic, and succinic [3]