Generically speaking, these flavors almost always consist of both fruity esters and phenolic components. Sometimes they also consist of an array of other flavors that are generically described as "funky". Specifically, fruity esters range from tropical fruits to stone fruits to citrus fruits, and are produced by all strains of Brettanomyces to some degree. Phenols, fatty acids, alcohols, aldehydes, and other compounds can also create a wide range of flavors including smoke, "barnyard animal", horse blanket, sweat, body odor, rancid cheese, etc. For more information on the identification of these compounds and the known conditions that impact their production, see Brettanomyces metabolism. For 100% Brettanomyces beers, see 100% Brettanomyces Fermentation.

In general, beers brewed with Saccharomyces and Brettanomyces tend to lead to a slow fermentation by the Brettanomyces, which can hyper-attenuate the beer over time (see Brettanomyces carbohydrate metabolism. These beers are often aged for at least 3-4 months to wait for a stable final gravity before packaging. However, they can also be aged for longer which helps develop flavors produced by the Brettanomyces. Due to the potential for acetic acid development when exposed to oxygen over time, care should be taken when aging any beer with living Brettanomyces (see mixed fermentation aging).

See the Packaging page for instructions on determining when it is safe to package a Brettanomyces and Saccharomyces Co-fermentation, and tips on how to package it.

One method that some brewers attempt is adding a small pitch of Brettanomyces to a clean beer at bottling time. This can be done either in the bottling bucket/tank, or added to each bottle individually. If adding Brettanomyces to each bottle individually, a 1 mL dosage of Brettanomyces from a starter should be enough since pitching rate seems to have little impact on the beer [4]. Some brewers believe that adding the Brettanomyces at bottling time results in a more complex beer. It is speculated that the extra stress of pressure within the bottles helps to create this complexity, although evidence for this is lacking. Other stressors such as lack of oxygen are also speculated to have an impact.

One challenge with this approach is that it is difficult to predict how much Brettanomyces will further attenuate the beer once in the bottle. Over-carbonation and bottle bombs can easily be an issue with this method if the brewer is not careful. Each degree Plato adds ~2 volumes of CO2 [5]. Since different species and strains of Brettanomyces ferment different types of sugars, some strains might be safer for dosing at bottling time. For example, most strains of B. anomulus do not ferment maltose, which is around 50% of sugar in wort, so this makes it a good choice for adding to the beer at bottling. However, if the amount of additional attenuation is already known for a particular beer and a particular strain of Brettanomyces, than any strain can be used.

Daniel Addey-Jibb, co-owner and brewer at Le Castor near Montreal, Quebec advises that the approach that his brewery takes is to ferment their saison wort down to 1°P. Once at 1°P , the beer is cold crashed, fined, and then bottled with Brettanomyces. The beer is then stored at room temperature for three months to condition naturally in the bottle. During bottling conditioning, their Brettanomyces culture takes the beer down below 0°P, and their desired level of carbonation is reached. This process took Addey-Jibb's team dozens of trials to perfect using their specific wort recipe, saison yeast, and Brettanomyces strain. Different species or strains of Brettanomyces might ferment differently, and different wort compositions might also ferment differently. For example, Addey-Jibb's saison is mashed with malted barley, wheat, and rye at a low temperature so there are not many higher chain sugars, allowing the beer to dry out quickly [6]. Other wort compositions that include higher chain sugars from specialty malts and/or higher mashing temperatures might ferment much slower, and thus knowing what the final gravity will be once Brettanomyces is added is difficult to know without running trials on that specific fermentation profile. It is recommended to use Belgian beer bottles of sparkling wine bottles that can withstand higher pressures than regular beer bottles just in case over-carbonation becomes an issue.

A "forced fermentation test" might help to determine the final gravity of a given Brettanomyces strain or blend of strains. Use the same wort composition as the beer in question, and pitch a large cell count of Brettanomyces. Use a stirplate if possible, and an airlock to keep oxygen out (some Brettanomyces strains can attenuate further when fermented aerobically and thus will not give an accurate final gravity reading when fermented aerobically). Keep the temperature around 80-85°F for a month or two, and then measure the gravity. Each gravity point gives produces about 0.5 volumes of CO2. Adjust the priming sugar for the rest of the batch accordingly. Use bottles that are rated for higher pressures, such as Belgian bottles or sparkling wine bottles [7].

For more information on bottling sour and funky beer in general, see the Packaging page.

The published analysis of beer that is co-fermented with S. cerevisiae and Brettanomyces is rare. In this section, published data on this topic will be reviewed.

Nick Mader of Fremont Brewing (2017 Master Brewers Conference Presentation) compared various flavor compounds produced between a 100% S. cerevisiae (BSI-565, Wallionian Saison yeast) and 100% B. bruxellensis (BSI-Drei), and percentage combinations of 75/25, 50/50, and 25/75 inoculations of the BSI-565 strain and BSI-Drei strain. Fermentations were completed in 35 days, and the beers were analyzed for their ester and phenol content. Attenuation results were about the same for the 100% BSI-565 and the co-fermentation of BSI-565 and BSI-Drei, while the attenuation rate was around 12% lower for the 100% BSI-Drei fermentation, indicating that co-fermentation with these two particular strains did not greatly affect attenuation and that the BSI-Drei did not ferment as well by itself.

The esters that were analyzed were ethyl acetate (pineapple, pear, solventy), ethyl butyrate (tropical fruit), ethyl hexanoate (apple), ethyl decanoate (apple, brandy), ethyl octanoate (waxy, pineapple), isoamyl acetate (banana), isobutyl alcohol (solventy), and isoamyl alcohol (fusel, banana). Ethyl acetate had the most sporadic results. It was highest in the 100% BSI-565 fermentation (43 ppm; above the 33 ppm odor threshold), and lowest in the 100% BSI-Drei fermentation (21 ppm; below the 33 ppm odor threshold), but when co-fermented the ethyl acetate production rates formed a pattern of more ethyl acetate as the pitching rate of BSI-565 was decreased and the pitching rate of BSI-Drei was increased. The 75/25 ratio produced 27 ppm of ethyl acetate, 50/50 produced 34 ppm, and the 25/75 produced 42 ppm (BSI-565 to BSI-Drei ratio in percent pitching rate). The highest ethyl acetate concentrations were therefore for the 100% BSI-565 and the 25%/75% BSI-565 to BSI-Drei.

The phenols that were measured in Mader's experiment were 4-vinylguaiacol (clove), 4-ethylguaiacol (smokey, spicy), and 4-ethylphenol (medicinal, barnyard). While the 100% BSI-565 fermentation had high levels of 4-VG (1800 ppm), they were less than half the amount in the co-fermented ferments (600-800 ppm) but still above odor threshold (300 ppm) (the different ratios of BSI-565 to BSI-Drei did not have a large impact), and 4-VG was below threshold in the 100% BSI-Drei fermentation. 4-EG and 4-EP had high levels in the co-fermentations with BSI-565 and BSI-Drei and the 100% BSI-Drei, and the ratios did not have a large impact. This is in agreement with another experiment by Lance Shaner and Richard Preiss that showed that pitching rate of Brettanomyces after fermentation with S. cerevisiae did not have a great effect on the levels of phenols produced [8].

Effects of Saccharomyces Strain Selection and Staggered vs Co-Pitch

Anecdotally, brewers often claim that the primary strain of S. cerevisiae makes a difference when co-fermented with Brettanomyces. However, until recently, there has been limited scientific analysis to back this claim, and some brewers might disagree with this claim. Similar differences in anecdotal experiences have been shared by brewers in regards to co-pitching Saccharomyces and Brettanomyces at the same time, or adding the Brettanomyces pitch after the Saccharomyces fermentation has finished (often called a "staggered pitch"). 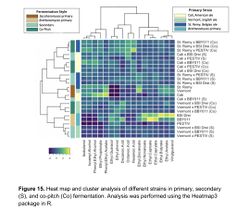 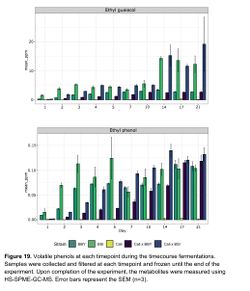 Key flavor compounds were analyzed for the different fermentations. Overall, the results showed that some flavor compounds produced by S. cerevisiae remained even when co-fermented with Brettanomyces (either co-pitched, or staggered pitch), indicating that the strain selection for S. cerevisiae for a co-fermentation remains important for the final flavor profile of the beer (see Figure 15). It is also possible that since this experiment was only conducted for 21 days that the Brettanomyces did not have enough time to have its full flavor impact. In general, there were no significant flavor differences between the co-pitched fermentations versus the staggered pitch fermentations (despite there being a very significant attenuation difference as previously mentioned) [9].

Riley Humbert's Bachelors thesis reported that the ability to hyper attenuate beer in secondary fermentation of B. bruxellensis is strain dependent with some strains fermenting at a slower rate than others (this was also the case for these strains when primary fermenting wort). The fermentation rate did not correlate to phenol production; for example, one strain that produced the most 4-vinyl phenol and 4 ethyl phenol was one of the slowest fermenters. Humbert also reported that strains of B. bruxellensis isolated from beer performed better than those isolated from wine, which is in agreement with previous experiments [10].