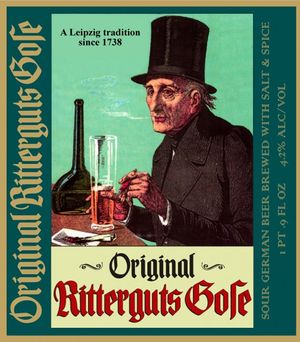 Ritterguts Gose is still made to the traditional German recipe.

Gose (Goes-uh) is a salty, sour, beer from Goslar, Germany that is brewed with at least 50% malted wheat (although a few historical sources say that Gose was brewed with 100% wheat [1]). Gose has a low hop bitterness and aroma and gets a lemony character from the use of coriander. The straw-like colored Gose (2-6 SRM) sits at a sessionable ABV around 3-5%, made up of mostly pilsner and wheat. Gose is usually unfiltered, so some haziness is to be expected.[2] 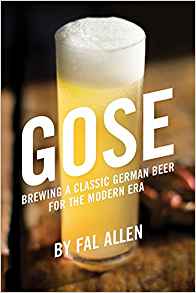 "Gose: Brewing a Classic German Beer for the Modern Era" by Fal Allen.

For a full history of Gose, see the book "Gose: Brewing a Classic German Beer for the Modern Era" by Fal Allen.

Historical texts suggest that some versions of Gose underwent an initial spontaneous fermentation that formed a "leather-like" barrier over the beer, and yeast was only pitched when the beer "was given away". A bacteria described as "Bacterium acetosum" in 1897 was identified as one of the important microbes that make Gose. This bacteria was described as an acetic acid producer, and could also be used to make vinegar. This bacteria was also hypothesized as being responsible for forming this "leather-like" pellicle, although speculation includes the possibility of the presence of a SCOBY. Some sources indicate that Gose was also bottled in thin long neck bottles without a cork, and the bacteria reformed the "leather-like" pellicle in the neck of the bottle that when dried out captured the CO2 in the bottle (the exact mechanism of how the "pellicle" dried out and became sturdy enough to hold carbonation is not understood). Coriander was not traditionally used in the brewing of Gose, but spruce branches were used for lautering and spiced versions used wormwood and cinnamon. Gose had less lactic acid than Berliner Weisse, however, it was described as being sourer than Berliner Weisse. This was probably due to higher amounts of acetic acid in Gose from the spontaneous fermentation and the acetic acid-producing bacteria.[3][4]

Most historical Gose beers were probably brewed with 100% air-dried malted wheat, although one example was reportedly brewed with 55% barley malt. Table salt was often added, and/or highly mineral water.[1] The original gravities of historical Gose seemed to change through time. In the mid-1850s, they seemed to be around 13-14°P (1.053-1.057 SG). In the early 1900s, the original gravities seemed to become smaller at around 9-10°P (1.036-1.040 SG), although some versions were still brewed with the higher starting gravities of the 1850s. Gose had a high finishing gravity with attenuation of around 60%, indicating that the beer might have been served young and with some amount of residual sweetness.[5] 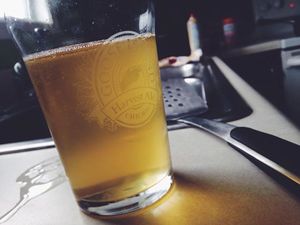 The Milk The Funk Gose is an 8 gallon (8 gallons in the fermenter) recipe for a lemony, tart, and lightly salty beer that will quench any thirst on a summer's day. This recipe is an 8 gallon, no boil recipe, and is made for a system with 73% efficiency. Please adjust the recipe to fit your system.

For an 8 gallon batch:

No hops if possible. Any amount of hops will prevent lactic acid production with Lactobacillus plantarum.

If hops have to be used for legal reasons (for commercial breweries in the US, for example) then use 2 oz of UK Goldings after souring during the second boil if kettle souring. If not kettle souring then use 1.2 ounces per BBL (0.04 ounces per gallon) in the mash so as to limit any inhibition as much as possible.

* If OYL-605 is not available, substitute it with a probiotic culture such as Goodbelly Mango or Swansons Plantarum. See Culturing From Probiotics. [6]