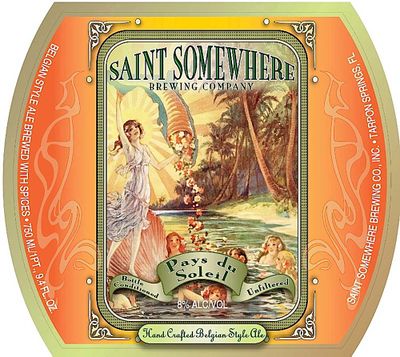 Saint Somewhere Brewing is located in Tarpon Springs, FL. Owners Bob and Anne Sylvester established the brewery in 2006. Saint Somewhere is self-described as eclectic with a niche product specializing in saison / farmhouse ales.

Original brewing equipment was bought from a brewery in Colorado. The equipment was converted dairy tanks built sometime in the mid 1980's. Fermentation is performed in red wine fermenters. Distinguishing factors of these fermenters are: flat bottom, flat top, open top, and straight sides.

Fermentation from grain to bottle is typically 3-4 weeks. Primary fermentation process is open top and typically completes in about 5 days with their house culture. The next 7 to 10 days is for aging and up to a week more before packaging. Age and ferment at ambient that's reached to 98F. The beer is complete once it meets a sensory taste tests that start as early as 12 days from inoculation.

Primary yeast in all beers is Saison Dupont mutant and Brett Bruxellensis. Open top fermentation allows for other local micro-flora to enter fermentation.

Here are a few quotes we got from Bob for a saison article in an issue of BYO:

"We started out with White Labs WL565. The famed Dupont strain. It took several generations to acclimate to the brewery environment. The first few batches took a couple of weeks to fully attenuate. We now reach full attenuation, typically down to almost zero, in a three days. Seventy some odd generations later, along with whatever wild yeast picked-up from the air, I'm convinced, what is now our house yeast, could ferment water. I pitch at a much higher temp. than normal (80F) and let it rise as it will to 90F or so. As soon as it drops below it's high point, I'll turn on the jackets to keep it below 75F for a couple of weeks."

"I still inoculate each bottling of Saison Athene and Lectio Divina with a shot of older beer with a more mature Brett. colony."

More quotes about specific beers and packaging: "Pays du Soleil gets a dose of Brett Lambicus at bottling."

Saint Somewhere beers are brewed authentically with simple malt bills comprised of Belgian malt and enough noble hops. Bob is a self described "traditionalist". Saint Somewhere has no plans to brew anything like a RIS or an IPA. He even stated, "Don't expect to see a Belgian Pale Ale."

All beers go through a 2 hour boil.

All adjuncts are added at the end of a 2 hour boil.

Same grain bill as Saison Athene. It is Hybrid between a Belgian Dubbel and a Saison.