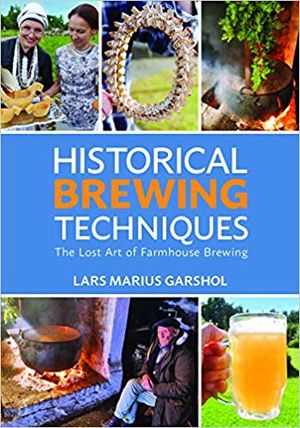 Although landrace is a term used in many areas, this page will be using it as descriptors of a yeast or mixed culture that derives from a traditional farmhouse/landrace brewing cultures from around the world (note that kveik, while considered "landrace" yeast, is split off onto its own page for wiki management purposes). This term was first used to describe yeast by Tyrawa et al. (2018) to describe traditional Norwegian kveik yeast [1], and to distinguish them from Saison yeast, which are also sometimes referred to as "farmhouse yeast" [2]. The exact definition of the word "landrace" is debated in the Plant Sciences, and is therefore outside the scope of this wiki [3]. The original owners of these yeasts pitch them at a wide variety of temperatures depending on the culture, anywhere from 5°C up to 40°C, but the majority being pitched at around body temperature. Some Finnish farmhouse brewers reported pitching their yeast at cooler temperatures (5-15°C). Garshol (2020) reported 5 types of farmhouse yeasts that have been collected as of 2020:

The term "landrace" should not be equated to "kveik". Kveik has been suggested to be a subtype of landrace yeast, but "kveik" is a term used specifically for Norwegian farmhouse brewing yeast and mixed cultures. More information on Norwegian kveik can be found on the Kveik page. for more information, see also "Farmhouse yeast: what do we know?" by Lars Marius Garshol.

Until the introduction of Emil Chr. Hansen's pure-yeast system in 1883, all yeast was treated in effectively the same way as kveik. However, pure lab yeast generally replaced the ancient cultures all over the world. In farmhouse brewing, the old practices continued until quite recently in several Nordic and Baltic countries. Farmhouse brewing still continues in Denmark, Finland, Sweden, Estonia, Latvia, and Lithuania. As far as is known, Lithuania is the only country other than Norway in which the old yeast cultures are still alive, and used in the same way as they were in the past. See Lithuanian beer - a rough guide for more information. Genetically speaking, these yeast cultures are generally not in the same family as kveik, and thus are not referred to as "kveik". The alternative nomenclature of "Landrace yeast" has been suggested by Richard Preiss.

Below are the listed known Farmhouse cultures and information we've been able to compile on them.

One yeast has been collected from farmhouse brewer Julius Simonaitis in Joniškelis, Lithuania. It's a communal yeast that's been shared with the neighbors since time immemorial. NCYC says the yeast consists of 5 different strains of S. cerevisiae [15]. Four of these are closely related, while the fifth is quite different, and is probably a completely different strain. All seem to be Saccharomyces cerevisiae. Technically, this culture is not considered to be "kveik" because it genetically falls outside of the kveik families and because it is POF+ (phenolic producing) [16][17].

Julius pitches the yeast at 35C and top-harvests it. He ferments 12-16 hours, depending on activity.

This is another Lithuanian strain from the Jovaru Alus brewery in the small community of Jovarai. The brewer, Aldona Udriene, discusses the history of this true farmhouse brewery in this article. She expressed in the article that she was reluctant to give up the yeast, but Omega Yeast Labs reached an agreement with her to bank the culture and offer it for sale as the product OYL-033. Omega Yeast Labs describes the yeast as, "citrusy esters and restrained phenols..." and having the "character of lemon pith, black pepper, and a soft mouthfeel." The Omega Yeast Labs culture is a single isolate, and Lance Shaner says that there was no evidence of more than one strain of S. cerevisiae in the culture that they received, although there was a Lactobacillus contamination which they removed from the commercially offered Omega Yeast Labs product [19]. Some DNA analysis shows that this strain has a similar degree of separation from S. cerevisiae that other Saccharomyces species included in the analysis do, indicating that this might be a new or different species of Saccharomyces [20][21] (~1:01:30 min in).

Two strains of landrace farmhouse yeast cultures from Chuvashia, Russia were analyzed by Richard Preiss of Escarpment Laboratories referred to by the family names "Rima" and "Marina" (see this tweet and this tweet by Lars Marius Garshol, and the full blog post by Lars). The lab performed ITS sequencing, PCR fingerprinting, and mini 7 day ferments with these strains. Both of the strains were S. cerevisiae, and they were both POF+ (phenol producers), which is distinct from Norwegian kveik strains which are POF- (do not produce phenols). Russian farmhouse yeast that remains unpurified by a lab is called "zakvaska" [22].

Marina contained what appears to be three closely related S. cerevisiae strains. They all showed pretty low attenuation after one week, but subsequent fermentations can be carried out longer. The flavors were described as "pretty neutral". There is a fourth yeast strain in the Marina that has yet to be identified [23].

These landrace cultures are listed in the farmhouse registry as #39 and #40. Propagate Lab and Mainiacal Yeast offer Marina commercially. They are being traded by homebrewers and single isolates are available from the NCYC (NCYC 4247 is Marina and NCYC 4263 is Rima).

It was initially found by Krogerus et al. (2018) that the single Muri strain recovered by Bjarne Muri is a hybrid of S. cerevisiae and S. uvarum, and is most closely related to the beer 2 yeast group (kveik falls into the Beer 1 group; see History of Domestication for more information on the beer yeast genetic groups) [24]. Unlike kveik, Muri is POF+ (phenolic) and STA1 (diastatic). Krogerus then performed full genome sequencing on the Muri strain and discovered that it is a genetic match for WLP351 Bavarian Weizen yeast. This strain is either a contaminant (most likely) or the original yeast used by the Muri family was the same as the WLP351 Bavarian Weizen strain. Krogerus's finding was independently replicated by Langdon et al. (2019) [25][26].

See Kristoffer Krogerus's blog post that goes into detail on his findings, as well as his Q&A post on MTF.